Skip to content
HomeMindsetDon’t change because of peer pressure. One day the people pressuring you to change may want to be the way you are now. 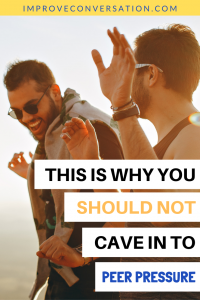 If you are going to change, it should be because you want to change as it will improve your life, or a family member or friend who genuinely cares for you and wants to see you become better has convinced you of the benefits of changing.

You should not change because you want to impress people.

You should not change because your friends who are not happy with their life, try to convince you to change your life for the worse so they feel better about themselves.

You should not change because your friend who wants to spend all their time partying tries to pressure you into not studying and to spend your time partying like they do.

You should not change because your friend who wants to waste his life chasing girls has decided to try and convince you to join him on his quest to meet as many girls as possible over the next 10 years.

You should not change because your friend who likes to spend a lot of money on unnecessary items to look ‘cool’ tries to convince you to do the same.

Don’t change for the wrong reasons.

There is also the risk that who you are now, may actually be what is desirable in the long run, but you don’t realise it and your friends don’t realise it yet. And when you do change to impress your friends, you will regret it later. Especially when in the future those friends who tried to change you from what you are now, then decide they want to become what you used to be.

Remember that, because it does happen.

One day, while you are a young, eager student in high school, you become friends with some people that just do not want to study. They keep pressuring you not to study and go out partying with them instead.

You want to fit in and impress them, so you throw the books away, and pick up the party bottle.

You go straight down the party road, your grades start to slip, and the only things rising in your life are your blood alcohol level and the ‘respect’ given to you by the ‘enjoy today, regret tomorrow’ people.

End of exams come around, you cram a little in the last minute, and barely pass your subjects. You feel a slight pang of regret realising that you did not achieve what you were capable of. But you comfort yourself by telling yourself that at least your ‘friends’ are in the same boat as you.

Fast forward a few years, you catch up with some of these ‘friends’ who pressured you into changing your life.

To your surprise, they are all different now. They have changed. They all now concentrating on either their careers or their university studies.

You ask them to hang out with you and catch up with you. They all say no to you. To your astonishment, all they want to do is concentrate on their career, or on their university studies. This baffles you. You keep asking them to catch up with you, but they don’t want to.

One of them even says to you, “I messed around too much back in high school. I wished I had not. If I had concentrated more on my studies rather than partying all the time, I could have scored higher grades, and be studying a better course than what I’m in now. Now I’m stuck in this. But if I work hard enough, I may still be able to transfer into a better course at the end of this year. I wish I could meet up with you, but I can’t because I really need to study. Goodbye.”

You feel a strong, sharp pain inside you.

These same people, who changed you from being someone who was always studying, who pressured you into giving that up to party with them, were now the ones who wanted to spend all their time studying. Now they are trying to be what you used to be.

How do you feel?

How does that make you feel?

You feel pain. Regret. Disappointment. The realisation you messed up.

And all because you wanted to change to impress people.

This is just one example of how changing to impress people will hurt you, but there are plenty of other situations. Not just in high school, but in other times as well.

Changing to impress people is pointless, as people change. The people you are trying to impress may one day change to want to be the way you are now.

Don’t be that person who changes just to impress others.

People do change, but it should be because you want to, because you see the benefit in it, or someone who genuinely cares for you and has your best interest at heart has shown you the benefits of changing.

Don’t change just to impress people. That is a recipe for disaster, disappointment, and plenty of pain and regret in the future.

Save yourself from suffering that pain, and avoid it by not changing to impress people.