Skip to content
HomeCommunicationComedy – Punchline. The funny part is the last word of what you say. 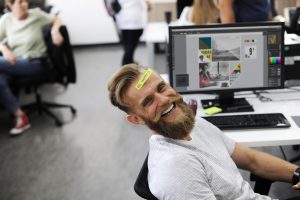 When you are saying a joke, there will be word or words that are the funny part, that creates the humour.

If possible, have this as the last thing you say. Have it at the end of the sentence.

Compare the two sentences below:

“At the job interview, if they ask me why they should hire me, I am going to say because I am passionate about not starving to death.”

“I am going to say I am passionate about not starving to death at the job interview if they ask me why they should hire me.”

If there are other words after the funny part in the sentence, it will make the joke less funny.

This is why it is normally a good idea to not say anything for a while between jokes to let the person listening to laugh and enjoy the joke. Then start speaking again after that, rather than speaking and cutting them in the middle of them laughing.

Professional comedians call the funny part the punchline, and they aim to have the punchline at the end of the sentence. It is something you should try to do if possible.